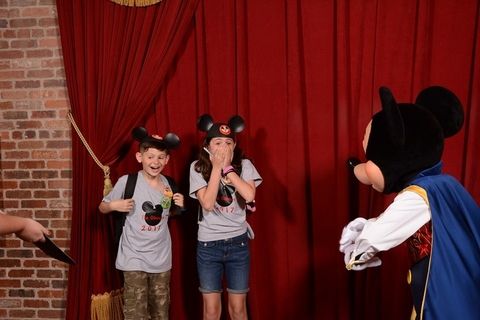 Courtney and Tom Gilmour became foster parents to Janielle, 12, and Elijah, 10, about three years ago and knew immediately they wanted to adopt the children, “but sometimes the system doesn’t work as fast as your heart works,” Courtney told USA Today. Finally, before a long-awaited family trip to Disney World in May, the Gilmours learned their adoption paperwork had been finalized, so they announced the news to Janielle and Elijah with Mickey Mouse’s help.

The plan fell into place pretty naturally as the Gilmours learned adoption day would line up with their trip. “I thought, ‘How cool would it be for Mickey to hold up a sign telling the kids,'” Courtney, who said she, a foster child herself, shared the video to raise awareness about foster children and adoption, told FOX 13. And so he did.

The video of the reveal (found above) shows the kids walking into a private autograph signing with Mickey, who also attempts some card tricks to impress the kids. Eventually, he gives up and is handed a card by someone off-camera: it read “Your Adoption Day Will Be May 24th 2017.” The moment has been viewed almost 2 million times since the video was posted on July 6.

The kids weep. Their parents do too. At one point, Courtney tells Elijah “Didn’t I tell you it was going to be magic?” They cry some more. Even Mickey is overcome.