For those of you who have ever wondered if you’re having sex as frequently as your contemporaries, there’s now a handy dandy tool that lets you see how you stack up to everyone else.

Courtesy of Slate, (the same people who brought you the average sexual partner calculator), their new sex frequency tool allows you to input your age, amount of times you had sex over the past 12 months, and whether or not one of the partners was your husband/wife/regular sexual partner. 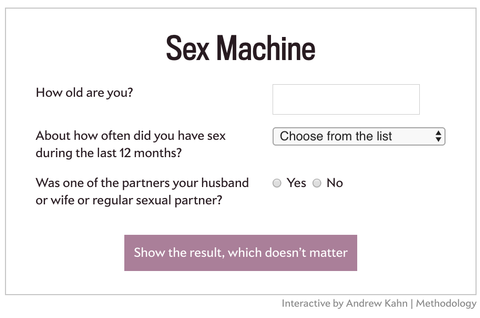 The tool uses14 years worth of data from the General Social Survey , a survey that uses a representative, self-reported sample of Americans from the National Opinion Research Center based out of the University of Chicago. It measures your stats up against other people your age to show you where you fall (not that it matters, there is no “standard” when it comes to this stuff). As noted on Slate, the data supports the finding that people in relationships have a lot more sex than their single counterparts — so CYA to the antiquated notion of casual daters being more promiscuous than their coupled off friends.

It’s also important to note with this kind of stuff that there is no true “normal” when it comes to sex and how everyone else is doing/not doing it. What works for you, works for you. With that said of course, check out the calculator. And yes, it’s totally okay to input your frequency of sex with different ages to see where you’ll be in a year if you keep boning at your current rate/where you were a year ago, I did it too.