? SORRY IN ADVANCE FOR THE TEARS ?

After releasing a trailer that racked up over 1.5 million views back in May, the student film In A Heartbeat is finally here.

And it’s been, predictably, well worth the wait.

you’re wrong if you don’t think the short film “in a heartbeat” is the softest thing to come out of 2017 so far pic.twitter.com/Ib7cmDYQyz

a concept: more lgbtq short films that are cute and wholesome like in a heartbeat being made forever

The four-minute short tells the story of a young gay boy trying to very literally suppress his feelings for a classmate. Not only does it capture the combined joy/terror/profound inconvenience of having a crush, it shows the complex emotions many LGBTQ people feel before coming out using shots of other students staring at the pair. So, if you want to feel the full spectrum of human emotion in under five minutes, watch this. 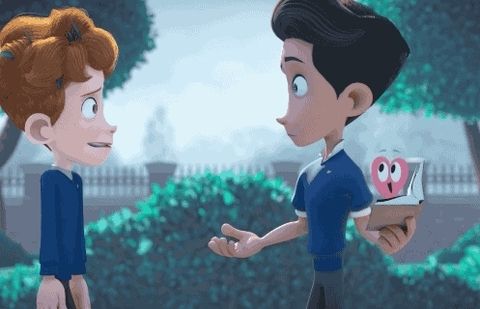 And while it could absolutely pass as Pixar, In A Heartbeat is the senior project of Beth David and Esteban Bravo, two Computer Animation students at Ringling College of Art and Design who more than quadrupled their original crowdfunding goal on Kickstarter.

Basically, this film is everything, but also not nearly enough. GIVE US A PART TWO, PLEASE. ?