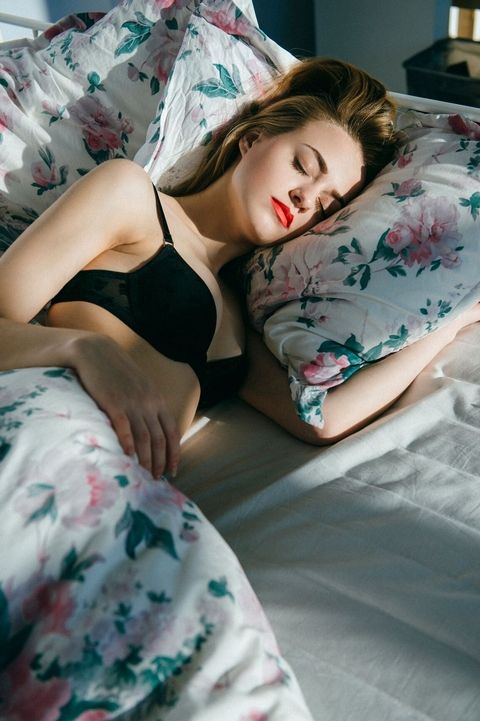 Here’s something that’s both a huge bummer and a source of comfort: According to the American College of Gynecologists and Obstetricians, as many as 75 percent of women will experience painful sex at some point in their sexual lives. Vaginas are strong as hell but that doesn’t mean they’re totally invincible. At some point or another, something’s bound to go a bit awry in your sex parts. The good news is that it happens to nearly everyone so you’re far from alone if you’ve ever noticed — in the middle of or after sex — that you feel a little bit like your vagina is on fire.

Experiencing a burning sensation during or after sex is a common complaint, according to Alyssa Dweck, MD, a gynecologist in New York and author of The Complete A to Z for Your V. But not all vaginal burning is the same. Dr. Dweck identified three primary categories for why someone might feel a burn: vaginal dryness, infections, or some sort of irritation caused by a product you’re using.

To learn a bit more about what could be causing your vagina to feel like it’s aflame during or after sex, Dr. Dweck and Leah Millheiser, MD, director of the Female Sexual Medicine Program at Stanford University School of Medicine, offer their expert advice.

The most common “hormonal change” responsible for vaginal dryness is one anyone with female hormones eventually goes through — menopause. As you approach menopause, estrogen levels start to dip, and one of the side effects of that dip is vaginal dryness. But for younger folks, though, vaginal dryness can be caused by birth control pills.

Dr. Millheiser said the no. 1 reason for burning during sex among the patients in her practice is a problem called provoked vestibulodynia, or PVD, that’s typically caused by low-dose hormonal birth control pills. PVD can cause someone’s vagina to develop a redness and makes sex painful. What’s essentially happening in your body is that it reacts to the low doses of hormones in your pill and then acts to suppress hormones within your body, as Dr. Millheiser explained. “Your vagina is acting like a menopausal woman’s because you’re only getting a very low dose of a hormone,” Dr. Millheiser said. She added that it’s particularly common (about nine times more common, to be clear) among women who started taking low-dose birth control pills at age 16 or younger.

The good thing about PVD caused by birth control pills is that it’s totally fixable. Dr. Milheiser said she typically recommends patients switch to another birth control method, like an IUD or the Nexplanon implant. She said it isn’t common that just switching to a higher dose of the hormonal pill fixes the issue.

Dr. Dweck also said medications — particularly things like antihistamines you take during allergy season to dry up your snot — are known culprits for causing vaginal dryness. “Antihistamines dry up secretions in the nose but also in the vagina,” she said. You can talk to your doctor about potentially switching to a different medication if you’d like, but Dr. Dweck said lube should do the job just fine by clearing up vaginal dryness and eliminating the burning you may feel as a result.

Burning Caused by an Infection

Both yeast infections and bacterial vaginosis, or BV, can cause the lining of the vagina to become inflamed, which can result in a burning sensation when it’s penetrated by a finger, a penis, a toy — anything. Dr. Dweck said this isn’t a symptom everyone with BV necessarily experiences but it’s a possibility. Those infections also generally come with some sort of vaginal discharge, so if this is the culprit behind the burning you’re feeling, you’ll generally be able to tell based on other common symptoms of yeast infections and BV.

Urinary tract infections, or UTIs, don’t just make it feel like you’re peeing a stream of pure fire but they can also cause a burning sensation during sex. Those infections cause the urethra and bladder to become inflamed, so any pressure in that area can be pretty uncomfortable. Luckily they’re easily cured with antibiotics. Some general advice if you have a UTI is to wait until symptoms are gone for two weeks before having penetrative sex.

Dr. Dweck mentioned gonorrhea and chlamydia as two STIs that are most likely to bring symptoms that result in burning during or after sex. Both of these infections can cause inflammation of the vaginal tissue, which can cause burning during sex and when you pee. If you think you may have had sex with someone with gonorrhea or chlamydia, or had unprotected sex recently, you should be tested to rule out an STI — both your vagina and your partners will thank you for it.

Herpes can also cause a burning or stinging feeling during sex, but Dr. Dweck said it’s primarily isolated to the lesions that accompany a herpes outbreak — they can be extremely painful. Because of the way herpes functions in the body, however, identifying lesions as the cause of burning during sex can be tricky. If you think you’ve been exposed to it, you should try to be tested when you feel like you’re experiencing symptoms (like lesions). In some cases, lesions can actually pop up on the lining of your vagina and feeling a strong, painful, burning sensation during sex may be the first tip that you’re having an outbreak.

Dr. Dweck said this is probably the most common cause of most vaginal burning during or after sex. If you’ve heard it once, you’ve heard it a million times: Do. Not. Put. Soap. In. Your. Vagina. That thing you always hear about the vagina being self-cleaning is true — there’s no need to go shoving a bar of soap up in there in the name of hygiene. “The inside of the vagina has mechanisms to keep the pH in balance in general,” Dr. Dweck said. You can wash your vulva — the skin area around your vagina — with a gentle, mild soap (like a plain Dove bar soap, for example), but should avoid anything with dyes or fragrance involved. If you feel like you need to scrub the living daylights out of your vagina to mask a smell that’s abnormal to you, Dr. Dweck said you should see your doctor and find out what’s causing it instead of spraying the area with perfume.

It’s also important to note that some bodies are just more sensitive to certain products than other bodies. Dr. Dweck clarified that some people may find their vagina is completely unbothered by strongly scented soap (though I dare you to find someone who can use that minty Dr. Bronner’s soap without feeling like someone lit a match beneath their vagina), and other people can’t put anything but water near their vagina without getting irritated. It’s essentially a trial-by-error thing — if you find that one product is continuously making your vagina feel dry, irritated, or like it’s burning, try switching to a different one.

Some people might also feel irritated, and therefore burn-y, as a result of certain condoms or lubricants. Dr. Millheiser recommended steering clear of any lube that contains glycerin if you’re someone with sensitive skin or is easily irritated by products. Lord knows there is no shortage of lube options in this world and your physician can help you pick one with a good reputation for not making people’s vaginas burn. Dr. Millheiser said if you and your partner have been tested and no longer use condoms, you can use olive oil, avocado oil, or coconut oil as a natural lubricant that shouldn’t cause irritation. But those oils will break down the materials in condoms and dental dams, so don’t combine the two.

There are also plenty of options available when it comes to condoms — latex, non-latex, sheepskin, etc. Even people without latex allergies can be sensitive to that material, Dr. Dweck said, so don’t be timid about trying other rubber options. Condoms that are scented, flavored, or contain spermicide are particularly known for causing tiny abrasions in the vagina that can result in a burning sensation. Don’t just stick to one brand, in other words. Try ‘em all out!

And not that this is a product in that it’s something you can buy at the drugstore, but both Dr. Dweck and Dr. Millheiser mentioned it’s a rare but real thing for people to be allergic or sensitive to semen. “Some women can feel irritated from semen, even up to an irritation level of an allergic reaction,” Dr. Dweck said. “It could be a product their partner may be using but some women are truly allergic to their partner’s semen.” Using a condom, in this case, should help. But you should also visit your doctor to rule out anything like BV (which is more common among people who aren’t using condoms), a yeast infection, or an STI.

Burning Caused by Something Else

Outside of the three main categories for burning sex (in the bad way) are vaginismus and burning caused by vigorous sex. “Sometimes the irritation is just because someone has had vigorous sex and that’s just a mechanical trauma,” Dr. Dweck said. Or if you’ve had a lot of sex recently, it’s not uncommon to get tiny little cuts in your vaginal wall or opening called fissures. They’re often so tiny you can’t see them, don’t bleed, but can cause a burning sensation during sex and when you pee. They tend to heal on their own but they need time to heal — read: You should avoid sex for a week or two while they heal. Dr. Millheiser also said soaking in a hot bath once a day can aid in the healing process so do with that information what you will.

Vaginismus is a condition where a person’s pelvic floor muscles immediately and involuntarily tighten up upon the anticipation of penetration. This can be penetration of anything — a penis, a finger, a sex toy, a tampon, anything. Dr. Millheiser described this as a “fear-based reaction” that can be caused by a number of things, from a highly religious upbringing that discourages conversation around sex to a previous trauma or sexual assault. “Women will often experience this from the first time they try to have sex,” Dr. Millheiser said. The pelvic muscles are so strong, the tightening and pushing back someone with vaginismus experiences upon the anticipation of penetration can feel extremely painful and sometimes like a burning sensation. What’s good about vaginismus is that Dr. Millheiser said it’s highly treatable with a combination of things like using dilators in increasing size to retain the pelvic muscles and therapy.

When You Should See a Doctor

The rule of thumb when it comes to burning during or after sex is to pay attention to how often it happens. Dr. Dweck said that if it’s only every once in a while, like once a year or so, it’s likely no big deal. But if you’re experiencing burning every single time, or often enough that it’s making your sex life unenjoyable and painful, you should see a physician. Whether it’s just a matter of using more lube, or treating an infection or condition like vaginismus, it never hurts to see your doctor. Especially when it comes to keeping sex enjoyable, fun, and completely pain-free.