The closest I’ve come to a sex act with a man is shaking up a cruet of Good Season’s salad dressing. Yet, I’m here today to review a phallic-centric sex toy because — well — I like to try new things. How do you think I ended up with all that salad dressing?

I have, however, ridden the Staten Island ferry. It’s free! And on that ferry, I have come into contact with several industrial diesel engines capable of propelling hundreds of people away from Manhattan at 6500 horsepower. I rode a boat with THE POWER OF 6500 HORSES. That is how you can be certain I am truly qualified to review this sex toy.

Most of the Motorbunny attachments that came in my trial kit are meant to provide stimulation internally, though there was one that could be used externally. You had to do all the work — but if you’re an external pleasure receiver, I’m sure you’re used to that already. The gargantuan sex toy, and new challenge for the storage solution folks at the Container Store, debuted just last fall. It hit the sexual device market after three years of research and testing with prototypes.

The Motorbunny is the Santa Fe-based company MB Technologies’ first foray into sex toys and retails at $899. Next month, this new kid on the mini-fridge-size sexual device block will release further advancements to their toy. In anticipation of these changes, I thought I would give their original flagship model an exhaustive (for me and for it) try. As you can imagine, they don’t make a lot of sex toys specifically for gender-nonconforming married gay people. I’m not even sure what that would look like — an ottoman made out of pizza in a neutral color? However, nobody said this wasn’t for me either. In fact, Craig Mewborne, Motorbunny brand manager, told me, “We have had so many customers reach out to us with their own unique experiences. That has really taught us a valuable lesson on becoming too ‘expert’ at telling people how to use Motorbunny. Our mission is to make it available and affordable for everyone. From there, we believe in our customers’ ability to explore their own sexual creativity.”

Akin to a horse’s saddle in shape, the flat bottom and cushioned half-cylinder design makes it easy to place it securely on a bed. I sat on the device, holding the controller like the reins of a Clydesdale about to bolt. I turned it on and the vibrations almost threw me off the bed. It was on “2.”

“It shook as though it was trying to raise demons from the earth’s core.”

I tried to hold my ground for a few minutes, turning it up and down a few times, but I feared seismic damage to my genitals and relented. Once off the toy, I turned it up to a “5” — the entire queen-size bed was shaking like a Magic Fingers motel special. I turned it up to a “10” and you could hear it from the street outside my apartment. I daren’t turn it up to “11.” Just kidding, I did. It shook as though it was trying to raise demons from the earth’s core.

If you are a sexual Tim “the Toolman” Taylor, a person who has always longed for MORE POWER on your vulva and clitoris — or wherever your body’s pleasure center may be — than your prayers have been answered. This is the toy for you! You can ride the supersonic waves to pleasure all day and it will not quit on you.

I switched out the smooth attachment for a phallic-shaped one. These extensions can be supported by a plastic rod or a metal spring, your choice. The rod allows for a more rigid ride, the spring makes your experience … springier. They come in a variety of lengths and girths, all of which are not my style. However, the silicone is quite soft, so if you’re into penetrative toys, this might be for you.

I turned on the oscillating “twirl” function and was taken aback by the circumference of the rotation. It seemed — even if you enjoy having a dildo-type object inside of you — the path of the twirl is far too severe. It just was way too wide a rotation to feel good. Given the average anatomy, it seems the orbit of an internal plastic penis should be similar to the path of the moon around the Earth — not something starting at Earth and carving a loop around Pluto. Also, why not have an “in and out” function in addition to, or as opposed to, a “’round and ’round” function?

After consulting the Motorbunny guide, I wanted to give one of their suggested uses a whirl. I turned the entire machine on its side on the bed and attempted to use it while lying on my back, rather than sitting atop it. This was the most promising of options, but in the end, it came up short — unless my goal was frightening myself, my wife, and passersby with the noise and quake of a chainsaw riding a dirt bike. That was a raging success.

Actually, speaking of rage, if a Rage Against the Machine song were transformed into a sex toy — then the Motorbunny would be it. If you like loud, intense, powerful things, then hop right on and you will not be disappointed. There is a wide array of attachments, though erring on the side of internal rather than external, and fine quality level of material. Also it’s easy to wash!

If you’re an adventurer with very strong and absorptive private parts, then give this a go. 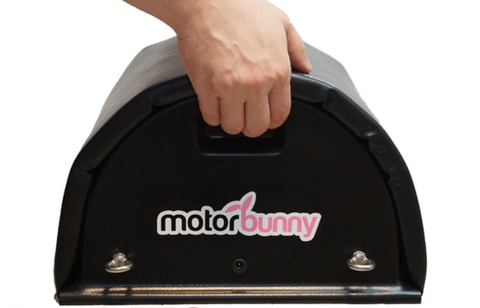 The Motorbunny is available on the aptly-named Motorbunny.com for $899.