It took Cass Clemmer four months to work up the courage to post this photo on Instagram. In the picture, Clemmer, who’s 24, is sitting on park bench on what looks like a picturesque summer day, wearing a blue checkered shirt and khaki pants that have a blood stain at the seam. Clemmer was worried about posting the photo for a few reasons: For one, it would mean coming out as trans to some friends and family members who didn’t yet know that Clemmer identifies as trans and nonbinary. But it would also mean opening themself up to an onslaught of hate from strangers (mainly on the internet) who think they’re allowed to dictate what Clemmer can and can’t do with their own body.

But on July 12, Clemmer was walking down the sidewalk in Washington D.C., where they live, and decided it was time. If only because this is still a country that seems hell-bent on squelching transgender rights, and because most people still only talk about periods in terms of female pronouns, Clemmer felt like they had to speak up. And so they did and the post ended up going viral in way they didn’t anticipate.

Y’all know I’m trans and queer, And what that means for me all around, Is something that’s neither there nor here, It’s a happy, scary middle ground. So when I talk gender inclusion, And I wrote these rhymes to help you see, I’m not tryna bring up something shallow, Periods are honestly pretty traumatic for me. See my life is very clearly marked, Like a red border cut up a nation, A time before and a time beyond, The mark of my first menstruation. So let me take you back, To the details that I can still recall, Of the day I gained my first period, And the day that I lost it all. I was 15 and still happy, Running around, all chest bared and buck, Climbing trees, digging holes, And no one gave a single fuck. I mean I think my ma was worried, So I went and grew out my locks, A sign I was normal, still a girl, A painted neon sign for my gender box. So, the day I got my period, My god, a day so proud, This little andro fucked up kid, Had been bestowed the straight, cis shroud. The relief got all meshed up in my pain, In that moment, I sat down and cried, Just thanking god I was normal, While mourning the freedom that had died. Everyone told me my hips would grow, I looked at them and couldn’t stop crying, “What’s wrong with you? You’ll be a woman!” They kept celebrating a child dying. See my body had betrayed me, That red dot, the wax seal, On a contract left there broken, A gender identity that wasn’t real. Most people deal with blood and tissue, And yet my body forces me to surrender, Cause every time I get my cycle, Is another day I shed my gender. My boobs betray me first, I feel them stretching out my binder, I send up questions, “am I cursed?” And wish to god that she was kinder. The five days it flows, I try to breathe, I dissociate, While my body rips outs parts of me, Leaving nothing but a shell of hate. The blood drips from an open wound, Of a war waging deep inside my corpse, The battle between mind and body, Immovable object; unstoppable force. #bleedingwhiletrans #menstruator #genderinclusion #mencanmenstruate #protectranskids #periodpride #genderdysphoria #menstruationmatters #ifmenhadperiods [PLEASE SHARE!?]

What set the wheels in motion to post the free-bleeding photo on Instagram? Is it something you’d been thinking about for a while?

I had the idea back in March when I was getting attacked by Breitbart and Christian Post. They called me a child abuser for the period coloring book that I published, because there are characters of all sorts of gender identities in the book. I think it’s really important to include a diverse gender spectrum when you’re talking about periods … I got a lot of death threats, it was a really intense time.

I thought of ways to fight back against that narrative and I came up with a list of things that I wanted to do in the future. This free-bleeding photo was one of them. But it was something that was really scary to do, scary to post, so it actually took me up until July to feel like I had enough support and felt strong enough to actually put it out there.

I kept trying to do it every month, and then I would stop and get really scared of the reaction. This is actually the first time that a lot of my friends and family found out that I’m trans. That’s really, that’s why it took so long.

What were the first thoughts that crossed your mind after posting it — were you scared? Relieved? How did you feel?

It was really absurd feeling because I had taken the photo two days before I posted it, had it on my phone and was thinking about it and looking over it. I wasn’t sure that I was going to post it. But then I thought about how I’d recently gotten attacked on a bus for being trans — I get attacked a lot here in D.C., just from my appearance, my identity, how I walk around. I was walking down the street and stopped myself and thought, I need to post this now, this needs to go out there, I need to stop being so scared. I’m really tired of people failing to recognize our identities and our lived experiences. So I posted it, and it was one of those moments where you do something and you look around and expect the world to be different, and it wasn’t.

“I’m really tired of people failing to recognize our identities and our lived experiences.”

In that moment, I came out to a bunch of people and put myself out there. I didn’t know what was going to happen with the post. I never thought it would go this viral. I not only posted this very intimate and provocative photo, but I cracked open my heart and was vulnerable in the poem [in the caption] and said things I hadn’t revealed to most people I’m close to. It was coming out to the world at the same time — it was a bit frightening.

Why do you think there’s still so little trans visibility in the menstrual space?

I think there are multiple pieces to the lack of visibility. The trans rights movement is incredible and magical and beautiful, but I think that there’s still so much transphobia out there and so many people that are so hesitant to address this, especially now in Trump’s America. I mean we just saw today what happened — we’re living in a really scary time to be trans. That’s part of it.

“As you start talking about the fact that you’re menstruating, you’re outing yourself.”

It’s also really, really hard for me to talk about. A lot of my fellow trans menstruators, for lack of a better term, have shared with me that periods are scary to talk about because as soon as you start talking about the fact that you’re menstruating, you’re outing yourself. Me putting that photo out to the world tells everyone that I have a vagina and a uterus, and that I menstruate, and that I was assigned female at birth. It’s hard to talk about something that automatically outs you.

What’s some of the positive feedback that you’ve gotten?

Someone wrote me this morning, and said that their friend is going through this and that they never knew how to talk to their friend about it. They had a friend who’s trans and who has a hard time with his period, but they didn’t really understand why, and that my post really helped them have a great conversation with their friend. That meant a lot to me.

I’ve had parents reach out to me and say that it’s helped them talk to their kids who are nonbinary or trans — to introduce the idea of periods to their kids, and that really means a lot to me.

I’ve also had trans people reach out themselves. People who feel very alone in this experience — similar to the way that I feel. Saying that it feels like something that they have to hide, something they have to go through alone. It means a lot to get that feedback. 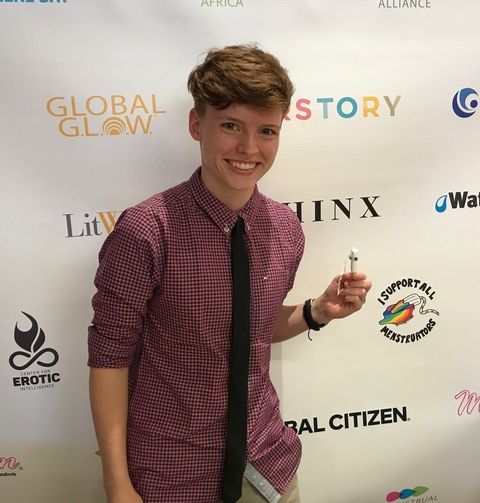 What motivates you to keep going and speaking out amidst the barrage of hate and threats?

We know about the high rates of suicide for trans youth. Part of the reason that it’s so important for me to do this work is because I attempted suicide twice — I’m very outspoken about that — and I survived. Every day that I’m alive now, I feel this internal push, this internal drive to continue trying to make the world a safer place for me and people like me.

That’s been why it’s so important. It has really made a huge difference to get those positive messages from people and know that I actually am doing what I set out to do. Even if one person writes something kind to me — and I have a million death threats — that’s really all that matters to me.