A blog post written by Chris “Spags” Spagnuolo on Barstoolsports.com (which I won’t link to here because they don’t deserve the hate-clicks) has drawn the ire of the internet today when he spoke about Rihanna’s new “high key thiccness” as a precursor to “a world of ladies shaped like the Hindenburg.” To be clear, this is fat-shaming nonsense.

In the post, titled, “Is Rihanna Going to Make Being Fat the Hot New Trend?”, Spagnuolo posits that Rihanna’s (apparent) weight gain in a series of grainy paparazzi photos is either the result of a “bad visual” angle, “enjoying that good room service a bit too long,” or pregnancy, as “happens to the best of us.” 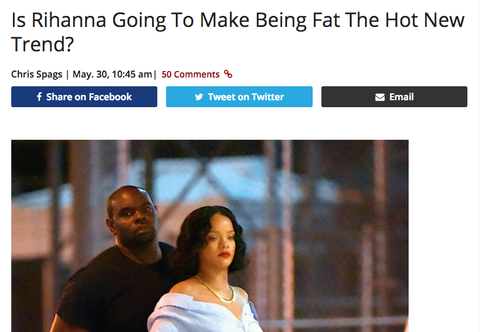 The author, who, again, is nicknamed Spags, writes that seeing Rihanna “pushing 180” is a “tough world to stomach” because Rihanna’s influence as a cultural tastemaker means these new photos will inspire a world “where all the hottest girls look like the humans in Wall-E. And just in time for summer too.”

Unsurprisingly, the post drew criticism, with many upset that Barstool had fat-shamed Rihanna.

Barstool has always treated women like shit. It’s gross, but nothing new. There’s no repercussions bc this is what the site + readers want.

I’ve yet to come across one male employee at barstool that isn’t shaped like a lump of raw dough so congratulations you played yourself.

Spagnuolo, meanwhile, is now claiming he’s being cyberbullied in turn. Since the backlash, the site’s founder, Dave Portnoy, has issued a statement saying he was making the executive decision to delete the blog post at 4:19 p.m. EST (though the offending tweet promoting the piece has been deleted, as of 5:49 p.m., the original post remains live). Portnoy has not returned Cosmopolitan.com’s request for comment.

In his statement, Portnoy weighs in, noting that while he didn’t think the “blog was as bad as many are making it out to be,” it wasn’t funny enough for him to want to die on the hill defending it. He says “lots of feminists not happy about it.”

This non-apology is problematic in its own way (many ways) because he doesn’t actually say there was anything wrong with the thesis behind the post in question, just that Spagnuolo did a bad job with his “jokes.”

To be honest I don’t think the blog was as bad as many are making it out to be, but I’ll tell you this. It wasn’t that funny either and I could have told you with absolute certainty that feminists would hate it and use it as an example of “there goes Barstool being Barstool again”. There are just certain topics that you better nail if you’re gonna write about them because you know they are hot button issues for us. So if you’re gonna blog about Rihanna gaining weight you better be funny as fuck and you better make it bullet proof. This line right here? “A world of ladies shaped like the Hindenburg loaded into one-piece bathing suits may be on the horizon now that Rihanna is traipsing around out there looking like she’s in a sumo suit.”
Well that’s neither.

Portnoy then says that there are other authors on the site whom he would’ve trusted to write this exact same blog post without an apology but minimizes the fallout by saying that he didn’t hire the writer in question “to be a personality at Barstool” (sick burn, bro) and that “he should not be writing blogs that we as a company end up having to defend.”

This is seemingly an attempt to shift the “oops, mb” from the media company to the writer — Spagnuolo — whom he basically chalks up to being a novice who overstepped his bounds. Evaluating the risk and reward of a story isn’t the only thing that makes you a good leader, as Portnoy suggests in his statement. You could also try offering a sincere apology that takes ownership of your mistake.