A married couple in Portland — Trystan and his husband Biff — are expecting a new baby this summer, after suffering a miscarriage in 2016. The couple, who are already dads to two very cute kids they adopted, recently talked all about trying to get pregnant, fear of another miscarriage, and breaking the good news to family members on the WNYC podcast, the Longest Shortest Time.

Trystan is transgender and, after becoming pregnant for the first time in 2016, endured a miscarriage just before a six-week ultrasound appointment. Biff, rattled by the miscarriage, wanted to wait a year before trying for another baby. But as Trystan mentioned on the podcast, waiting and then trying to become pregnant again as a trans person is tricky — it means staying off testosterone. Rather than restart and then quit testosterone, the couple decided to try again for a baby. 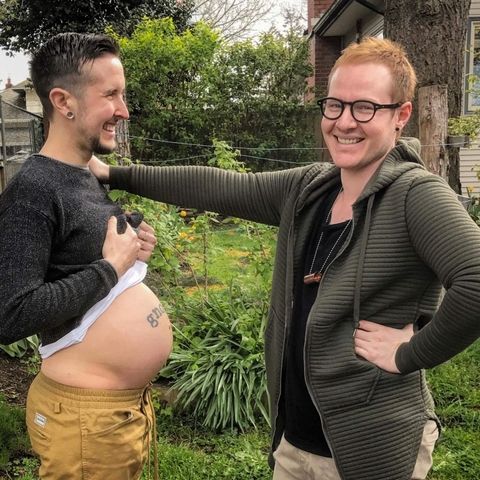 Trystan said the early stages of his pregnancy were a little scary after the miscarriage. Biff described as a “very cautious phase, emotionally.” Fear of another miscarriage drove Trystan to weigh himself “obsessively,” he said, to make sure he was continuously gaining weight in the early weeks of pregnancy. Ahead of the six-week ultrasound appointment, Trystan called ahead to tell the ob-gyn’s office to get ready to treat a “pregnant dad.”

“I can feel someone looking at my face and searching for the remnants of womanhood,” Trystan told the podcast. “They kind of squint their eyes a little bit and I can tell they’re trying to take away my beard, they’re trying to de-transition me in their heads.” But at his ob-gyn’s office, he said he’s had nothing but positive experiences. No one has thought twice about the fact that he is, indeed, a pregnant dad.

Biff and Trystan have been very transparent about their journey from dads to two children, to dads expecting a third. Aside from documenting their story on the podcast, they’ve shared parts of their experience on a personal website and on a shared Facebook page. Recently, they hosted a joint Q&A for people to ask all about the experience of being pregnant as a man, and adding a third child to a family with two adopted children already in it. 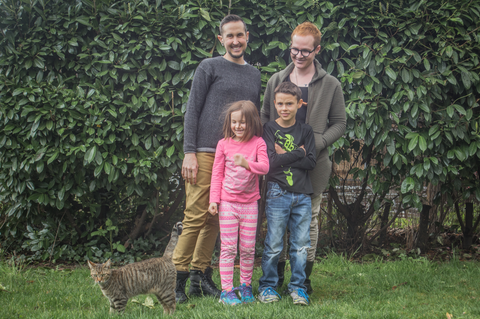 Trystan and Biff say that, for the most part, people have been really supportive and encouraging of their growing family. At a recent doctor appointment, they learned the baby’s sex is male. The couple has a joke they like to make about this new discovery. “Our baby has been diagnosed male,” Trystan said jokingly. “That’s my own little joke in our family — diagnosis: male.”

You can hear more about Trystan and Biff’s story on the Longest Shortest Time and on their website.