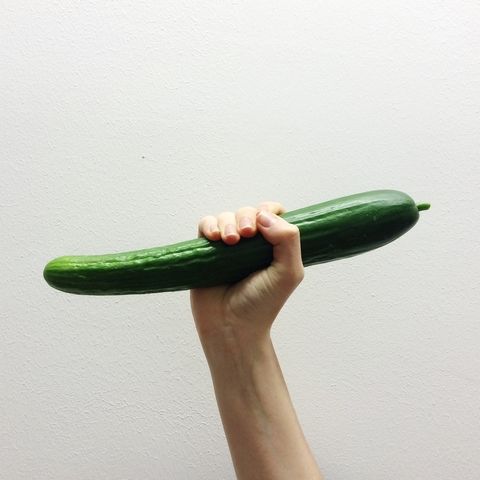 Some women hate giving blow jobs. Some women love it. But even women who love it will admit there are some not-so-great things guys do that make the experience of blow-job-giving … suck. Here are things every guy can go ahead and stop doing immediately to be more gracious blow-job-receivers.

1. Orgasm without warning. There’s no way it sneaks up on you that quickly. I don’t believe you. Even if you don’t realize it until you’re going to come in 0.01 seconds, saying, “I’m coming!” will give her 0.01 seconds to close the back of her throat and avoid choking on Niagara Balls.

2. Demand that she get on her knees. If that position is comfortable for both of you, great, but if she is not in mood for getting intimate with your hard wood floors, that lady deserves to be reclining on a sofa.

3. Push on her head like you’re trying to dunk her at the lake house. People have gag reflexes. You may have never shoved a large object back into your throat, but if you did, you’d know that she is probably focusing really hard on not gagging the whole time, just for your pleasure. Put it this way: Would you rather face-fuck her or not get thrown up on? I feel like probably the latter. Her head is not a sex toy.

4. Fail to make sure your dick meets a respectable level of cleanliness. “Freshening up” is for everyone. If you’ve been walking around accumulating ball sweat all day and now you want a blow job, visit the bathroom and splash some water around down there. Don’t make her inhale your funky sack.

5. SILENCE. Dirty talk. Groan. Say you like that or suggest she play with your balls. Literally any noise you make is better than just sitting there in complete silence, leaving the gross suctiony noises ringing in her ears.

6. Let it keeeep draggiiiiinngggg onnnnnnn. Some guys have a hard time coming from blow jobs. Some guys just came and now they’re getting a blow job, and they’re lasting forever. If you see her shifting positions or developing lockjaw, for the love of god, suggest you switch to doggy-style or something. Also, women, if you’re starting to cramp, you too can and should suggest doing something else.

7. Say “suck my dick.” Even if you’re saying it to literally ask for a blow job, it has aggressive and insulting connotations. Ask nicely. Might I suggest: “Will you go down on me?”

9. Act like you’re entitled to a BJ. No. You’re not. If she happens to want to give you one when you want it, lucky you and I suggest you reciprocate. If she doesn’t, move on. In the words of Michael Bublé: Don’t be a baby.

11. Refuse to go down on her. You don’t have to keep score like, “OK, it’s the bottom of the ninth, and I’ve had three triples, and you’ve only had one double and one triple, so I guess I’m up to bat,” but don’t be the guy who is always on that blow job tip and then will not even introduce himself to a vulva.

This post was published in 2015 and has been updated.